On Display at Galter: Surgery Classics

Each book in the limited facsimile edition series was bound in leather with decorative marbled endleaves and gold gilded page edges, including a permanent silk ribbon page marker. A “Notes from the Editors” pamphlet was inserted in each volume sent to series subscribers, describing the book’s history and significance. Information about the books and authors used in the display was found in the publisher inserts as well as Morton’s Medical bibliography: an annotated check-list of texts illustrating the history of medicine, 5th edition.

Featured in the Display 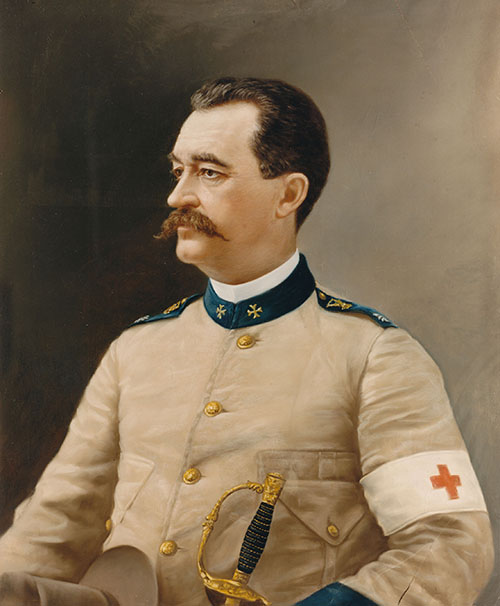 The four display cases contain reproductions that highlight the evolution of surgery over the years and feature general and collected works, memoirs and biographies, as well as early works in surgical specialties. For example, one facsimile on display, The Edwin Smith surgical papyrus, is the oldest known surgical treatise, consisting entirely of case reports. Another book, Apologie and treatise of Ambroise Paré containing the voyages made into divers places with many of his writings upon surgery, was authored by Ambroise Paré (1510-1590), who started as a barber surgeon, became a military surgeon and surgeon to kings, and was ultimately known as the father of modern surgery. The book is considered one of the great works in the history of surgery.

Two books on display, reproductions of Experimental Surgery and Principles of Surgery, were authored by Nicholas Senn (1844-1908, pictured), who emigrated from Switzerland to the United States as a youth and graduated from Northwestern University’s medical school in 1868. He was one of the leading surgeons in North America, sometimes called “the greatest surgical genius of his age.”

Other books on display include reproductions of the works of John Abernethy, Theodor Billroth, Harvey Williams Cushing, William Stewart Halsted, and other surgical pioneers.