Edward Falces, MD, was born on February 8, 1931, in Waipahu, Hawaii, to Filipino parents. His father, Atanacio, like many immigrants in Hawaii at the time, worked in the cane fields on a sugar plantation. Falces attended the University of Hawaii as an undergraduate for one year before one of his professors moved to Northwestern University and helped secure a scholarship for Falces. He transferred to Northwestern, started studying marine biology, and graduated with a BS in 1953. 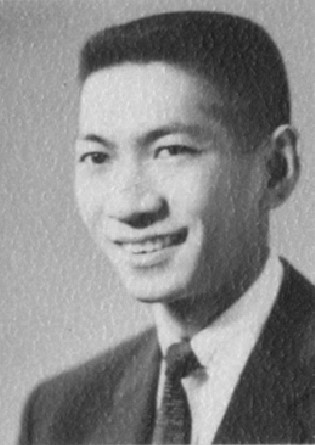 Another Northwestern professor told Falces that with the Korean War ending and veterans returning home and going to college, there were more openings in the medical school than in other graduate degree programs. Following this advice, Falces attended Northwestern University Medical School and received his MD in 1957. In 1956 he married fellow medical student Frances Keen, with whom he would have four children and would eventually divorce in 1984. After graduation, Falces moved to California, where he completed his internship in Los Angeles and his residency in general surgery at St. Luke’s Hospital in San Francisco. Image at left: Falces's medical school class of 1957 portrait, Galter Library Special Collections.

From 1959 to 1961, Falces served as a surgeon in the Army at a camp near Richland, Washington. After leaving the Army, he shifted his focus to plastic and reconstructive surgery and completed a residency in that specialty at St. Francis Memorial Hospital in San Francisco. He then joined the practice of Mark Gorney, MD, the chief of plastic surgery at St. Francis during his residency. He remained in private practice from 1966 until his death.

Throughout his career Falces was involved in treating burn victims: he was director of the Bothin Burn Center at St. Francis Memorial Hospital and a burn consultant at San Francisco Public Hospital. He also founded the Reconstructive Surgery Foundation with Gorney in 1976, which provided medical education and training for speech correction surgery. He travelled to the Philippines frequently to treat burn victims on behalf of the Foundation. In addition to this work, he was known for performing gender affirming surgeries for transgender patients as early as 1966.¹

Beyond his private surgical practice, Falces was involved in teaching and training new surgeons. He was an associate professor at Stanford University and the University of California San Francisco, and he participated in the residency training programs at Stanford, UCSF, St. Francis Memorial Hospital, and Far Eastern University Medical School in Manila, Philippines. 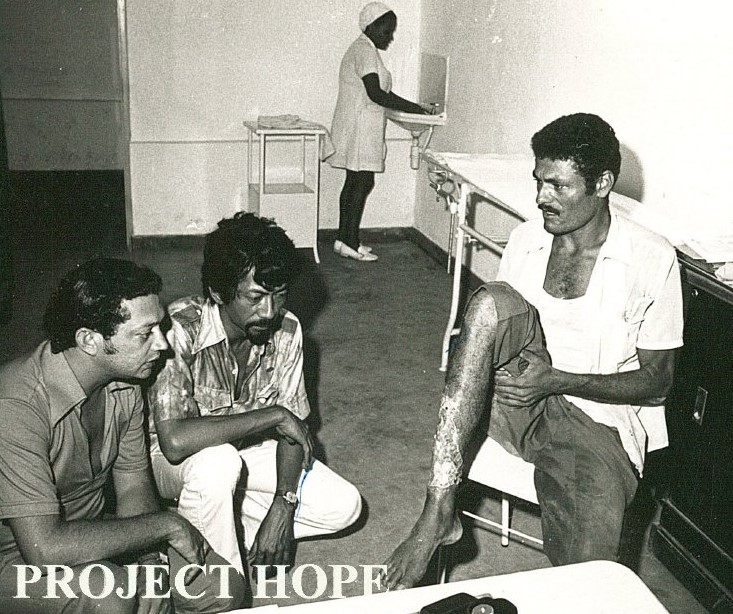 Falces also dedicated a large part of his medical career to volunteer work in countries around the world. In addition to serving as the president of the Reconstructive Surgery Foundation for 25 years, from the 1960s and early 1970s he worked with the healthcare-focused nonprofits Project HOPE and Esperança. He performed surgeries for cleft lips, cleft palates, burn scar contractures, and other conditions in Brazil, Mexico, the Philippines, Taiwan, and other countries. He was also involved in the early years of Interplast, a volunteer surgery organization founded in 1969 by Donald Laub, MD, the chief of Stanford’s plastic and reconstructive surgery department. Image at right: Falces (center), with another Project HOPE doctor and patient, in Maceió, Brazil, Project HOPE Virtual Gallery.²

Edward Falces died on December 16, 2004, in San Francisco. In an article in the San Francisco Chronicle published after his death, Falces’s colleague Mark Gorney described him as “one of the best and most able people I’d ever seen... He was an extremely able surgeon."³