Throughout our rich history, Northwestern’s medical library endures as a critical information partner to support our shared research, clinical care, and education mission. Our tradition of excellence has continued to evolve with Galter aligning with the Northwestern University Clinical and Translational Sciences Institute (NUCATS) in 2013 to support synergies for integrated resources, services and support. Most recently, the physical space was renovated and modernized in 2020 to support the dynamic learning and research needs of our patrons. 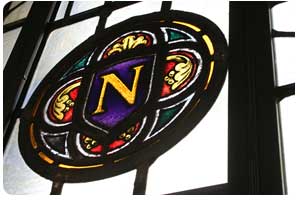 As long as there are medical, dental and other health sciences schools, they will have a library to meet their information needs. The history of the Galter Health Sciences Library traces its origin to small collections that were established at the beginning of the medical and dental schools. In the Galter Library's case, there are two lines of descendants, each with an interesting and colorful history.

The origin of Northwestern's medical school is 1859 with the establishment of the medical department of Lind University (later to become the College of Lake Forest). Within the new building in downtown Chicago was "a faculty room also containing a 'library'" (Arey, p. 44). Between this beginning date and the establishment of Northwestern's Chicago Campus as its home for the university's professional schools of medicine, dentistry, law and commerce in 1925, there existed a series of medical libraries at each stage of the school's development. Given the times and the state of medical education, the library was not great. Reference is made to the dissolution of the medical library around 1870 for lack of use, and volumes were donated to a type of unified library established by the Chicago Medical Society, presumably for use by any student, faculty or physician living within the city. The medical School's Alumni Association revived the school's own library in the early 1880s and supported its growth through the sale of textbooks to students. Still, growth in the collection, a standard for measuring a library's greatness well into the end of the 20th century, was poor to modest. Real growth happened in the 1920s as a result of firm leadership in the form of a champion for the medical library, Dean Irving S. Cutter.

The origin of Northwestern's dental school is 1891, the result of affiliation and absorption by the university of some of Chicago's successful proprietary schools for dental education. While authoritative details are missing, presumably, these dental schools supported a library, though one was conveniently located across the street from a predecessor of Northwestern's medical school. While the two schools shared basic instruction, we trust there was also sharing of library resources as well. The first reference to Northwestern's dental library is its purchase by Dr. Theodore Menges, secretary of the school, from Dr. Jonathan Taft, dean of the dental school at the University of Michigan. This large collection of 2,000 volumes continued to grow until the time of the school's move to the Chicago campus. 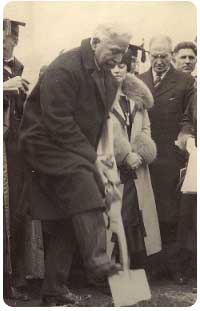 The construction of the Montgomery Ward Memorial Building to house Northwestern's medical and dental schools provided real spaces purposefully designed for their respective libraries. Both libraries consisted of single reading rooms with adjoining staff and stack space. The medical school library was located on the building's first floor off the ornately decorated lobby. The medical library matched the lobby style with a decorated beamed ceiling, arched entries and spacious study tables. The dental library was located on the building's 10th floor at the end of a hallway that developed as a dental museum over the years until most holdings were donated to the Smithsonian Institutions in the 1960s. Some of these museum holdings have resurfaced at the National Museum of Dentistry (NMD) on the campus of the University of Maryland at Baltimore, home of the nation's first dental school. In the NMD, reference is made to the Jacksonville, Illinois office of Dr. Greene Vardiman Black, Northwestern's Dental School dean from 1897-1915 and the acknowledged father of modern American dentistry for his leadership in dental education and dentistry as a discipline. Both libraries began their acceleration in growth with the medical library becoming the country's third largest medical library in the 1930s and the dental library claiming to be the largest dental library in the world.

While the dental space managed to contain this substantial growth in the same space until its merger with the medical library in 1996, the medical library had to expand in 1964 and again in 1994. Both expansions happened after substantial growth in medical school buildings. In 1964, the medical library expanded as a result of the school's new G.D. Searle research building by extending out of its one-room configuration into an adjoining new reference room on the first level of Searle, leaving the original library space to serve as a new reading room. In addition, the library expanded into a new stack tower of basement, first and mezzanine floors that were formed by the enclosure of the entire medical school buildings of the time (the original 1925 Ward Building, the Morton Research Building (1955) and the new Searle Building). The 1964 addition allowed the medical library to continue to grow its print collections. In the mid 1970s a re-decoration took place that added more accommodating and attractive furniture, provided better staff space for handling the growing print collections and made preparations for the coming online age with staff access to computer terminals for the original MEDLARS search services.

Collections continued to be the hallmark of what libraries were about during the 1960s, 1970s and to some extent into the 1980s. Bigger collections meant bigger libraries, and in the typical American fashion, bigger always meant better. With the serials crisis starting in the 1980s, the ability of librarians to grow collections began to be hampered by the institution's inability to provide the requisite funds to cover journal inflation as well as additional funds for true growth. Northwestern's medical library in particular began to suffer and in the 1990s was truly behind its peers in counts for currently received serials, monograph additions and total acquisitions expenditures.

At the same time as collections were beginning to wane, libraries began to spend dollars to improve services via the use of new information technologies. MEDLINE services were introduced to the Northwestern medical school in 1975, and automation efforts expanded in the late 1970s and 1980s when the University Library in Evanston lead its peers in the development of NOTIS, the Northwestern Totally Integrated System. This 'father' of all library systems integrated acquisitions, authority control, serials management, cataloging and circulation systems into one complete whole. The Medical Library latched onto these services as much as possible by participating in the system established by its North Campus colleagues and was fully automated in 1986 when the last module -- the circulation system -- was introduced. Efforts to automate other library services continued with the microcomputer revolution of the late 1980s. The Medical Library was able to claim leadership among its peers in health sciences and academic librarianship by introducing local MEDLINE services in 1993 when it purchased Ovid Technologies' online system. Using new standards for wide area network access, Ovid Technologies adapted its CD-ROM MEDLINE subscription to these standards and offered customers local management of their databases of choice. By choosing this innovative product, the Galter Library was able to offer MEDLINE access throughout the entire university. The library now had its own systems staff and was providing innovative services through technology. If the library could not succeed in building a successful collection, it could succeed in using technology to provide more and more access to remote resources.

Galter Library’s 45,000 square foot physical facility provides a comfortable and welcoming environment for collaboration and research. Beginning in 2012 and spanning the course of several years, over 300,000 physical volumes were shifted to Northwestern University’s Oak Grove remote storage facility or removed from the collection. The resulting open space was reconfigured to provide better support of small-group sessions, independent study, and campus events – and prepare for the library-wide renovation, which kicked off in 2018. This major renovation provides students, faculty, and staff with high-tech training spaces and comfortable collaboration and study zones. Construction was completed in 2021, providing faculty, researchers, and students with an innovative setting to support students well into the future. The renovation improves function and enhances the library’s footprint to better support our educational, clinical, and research missions. A sky bridge now joins Galter Library to the new Simpson Querrey Biomedical Research Center, promoting interaction and access to library and technology resources. A greatly expanded 24-hour study space now serves as a hub for collaboration, investigation, and learning, including a touch-down research computing cluster of high-powered research machines loaded with specialized analytical, statistical, and visualization software programs. Flexible rooms actively support large and small group instruction in a technology-rich environment and large monitors throughout the library encourage discussion and dialogue. Partnering with the Office for Medical Education, Galter supports wellness initiatives such as treadmill desks, yoga classes, and stress relief activities during busy exam times. These initiatives enable the library to create a supportive environment that prioritizes “the whole person,” building on the balance of physical, emotional, spiritual, and community health.

Adapted from The Galter Health Sciences Library of The Feinberg School of Medicine by James Shedlock, AMLS, AHIP, part of the entry on Northwestern University Libraries in the Encyclopedia of Library Science, 2nd ed., 2003.)

Leslie B. Arey on the history of the NU Medical School Library