“As long as you know what you’re doing, everything is okay. Just whatever you do, do it good.”

These are the inspiring words that M.D. Davis, II said to his son Miles when he heard his son was quitting Julliard to join the music scene with famous musicians Bird (Charlie Parker) and Dizzy Gillespie. M.D. Davis, II was not unfamiliar with doing things exceptionally well in his own life, so imparting such wisdom to his son was an intuitive thing for him to do. 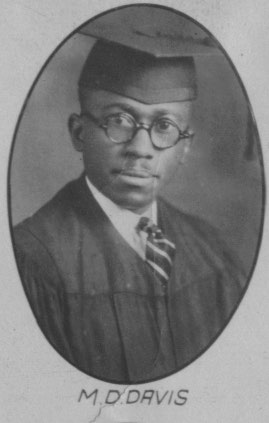 M.D. Davis, II was born in Arkansas to a bookkeeper who lived under the constant threats of white men and was driven off his land when his business became too successful. Although Davis saw the effects of discrimination on his father, it did not deter him from striving for greatness in his own career. He, along with his brothers and sisters, were so gifted that they skipped high school and went straight to college. Davis graduated from Arkansas Baptist College, studied at Lincoln University, then became one of three black students to graduate from Northwestern University Dental School in 1924. He eventually became a successful dentist with his own practice and was an active member of Omega Psi Phi Fraternity and the National Medical Association.

He moved his family from Alton, IL to East St. Louis, IL, where he served as State Educational Director of the Elks Club. Socially he was a member of the Masons, Knights of Pythias, American Woodsman, and the NAACP. While Dr. Davis was a member of the NAACP, he was drawn to the temperance of the Marcus Garvey movement. The Garvey movement focused more on the idea that African Americans should strive for financial independence from white society.

Dr. Davis was a wealthy man. He wanted a fire department near his farm in Millstadt, IL, so he took matters into his own hands and ran for a spot as a State Representative. His son, Miles explains in his autobiography, “Some white people wanted to give him money not to run, but he ran anyway and lost.” Although he was defeated in the political arena, Dr. Davis showed he could not be forced to do anything, and he instilled this value in his children. In addition he taught them the importance of thinking for oneself and how to develop communities through their own eyes. Once, he told his son while attending to a patient, “You hear that bird outside the window? He's a mockingbird. He don't have a sound of his own. He copies everybody's sound, and you don't want to do that. You want to be your own man, have your own sound. That's what it's really about. So, don't be nobody else but yourself. You know what you got to do and I trust your judgment.”  His son thought back to that day, and recalled, “That was all he said and then he went back to working on his patient."

We are thankful to Dr. Davis for giving his son such wonderful advice. Not only did he overcome obstacles that were challenging to blacks in medicine in his own lifetime, he also planted the seeds of innovation in his own son, Miles Davis, one of the greatest musicians of all time.