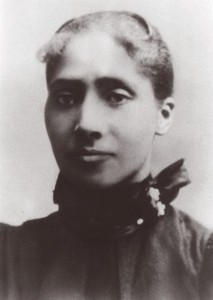 Emma Ann Reynolds was born in Frankfort, Ohio in 1862, when the thirteenth amendment which declared slavery illegal had yet to be ratified. Throughout her life she was always determined to overcome any barriers set before her because of her race. Reynolds began her path to medical education by graduating from Wilberforce University, a historically black university. Soon after, Reynolds moved to Kansas City, Missouri, and began teaching. It was here that she noticed extreme health disparities between blacks and whites. Determined to meet the health needs of the African American community, Reynolds applied to nursing schools, only to experience rejection repeatedly because she was black. She and her brother Reverend Louis H. Reynolds approached Daniel Hale Williams, MD (1883) about the lack of opportunities in Chicago for black women to train as nurses. Williams also recognized discrimination in medical care and education and created Provident Hospital, the first hospital owned and operated by African Americans, in 1891. Reynolds graduated from Provident Hospital’s nursing school in 1892, and through that experience was given an opportunity to change how African Americans were received and treated in hospitals. 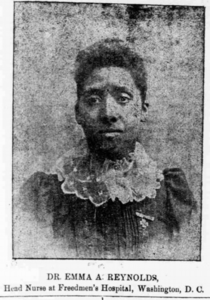 Emma Reynolds’ fight for equality in healthcare was still far from done. She enrolled in Northwestern University Woman’s Medical School and became the first African American woman to graduate in 1895. She moved to Waco, Texas, where she worked as a supervisor of the Training School for Nurses and became Resident Physician of Paul Quinn College. Reynolds stayed there until 1899 and then moved to New Orleans to practice. There it was noted that she had excellent expertise in treating contagious diseases. In 1902 she moved back to Frankfort, Ohio, and remained there until her death in 1917.

We honor Emma Reynolds today and year round for her long and arduous journey to keep educating herself in order to serve her community. Again and again she proved her dedication to medical education and care, and her achievements set the precedent for future generations of physicians. Data from the Association of American Medical Colleges suggests increasing growth in the enrollment for African American women in US medical schools over the past five years. However, there is still much work to be done.