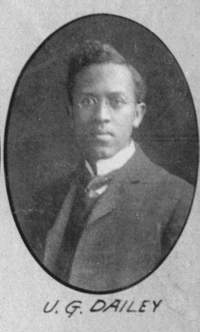 Ulysses Grant Dailey overcame financial and racial obstacles to become an internationally respected surgeon. More than a surgeon, Dr. Dailey was a teacher, training physicians who later became leaders and role models; he was an editor, shaping a forward-looking editorial style, reflecting his ideals and passion for medicine through the Journal of the National Medical Association; he was an administrator, founding a hospital which offered training positions to young physicians and treatment for patients regardless of race; lastly, he was an ambassador of American medicine, traveling to countries around the globe, assisting in studying and shaping health care systems.

Born in Donaldsonville, Louisiana on August 3, 1885, Dailey grew up in Fort Worth, Texas and Louisiana. Under the guidance of his grandmother and mother, he became an avid reader, and studied French and piano. Early on, he had chosen a career as a pianist and he graduated from the preparatory academy at Straight College (now Dillard University) in New Orleans. While a student in Fort Worth, Dailey became the office assistant for Ernest L. Stephens, a practicing physician and professor of materia medica in the medical department of Fort Worth University. Impressed by Dailey's seriousness, Stephens encouraged the young man's wide reading. When a typhoid epidemic struck the city, Stephens assigned Dailey to visit his homebound patients to take temperatures and do similar tasks. With his increasing experience in medicine, Dailey resolved to pursue this profession rather than music.

Dailey was accepted at Northwestern University Medical School after several conversations with the dean, and enrolled in the fall of 1902. He supported himself through a variety of jobs, including playing piano in bars and taverns. Dr. Peter Burns, director of the anatomical laboratory, hired him as an assistant and instructor for two years. Dailey received an MD in June 1906.

Dailey was denied the opportunity, because of his race, to spend two weeks at Mercy Hospital in Chicago doing obstetrics in the charity ward. In 1907, Provident Hospital appointed Dailey gynecologist to their dispensary. In 1910, he became an associate surgeon, and from 1912 to 1926, he held the title of attending surgeon.

The major turning point in Dailey's medical career came in 1908 when Dr. Daniel Hale Williams* of Provident Hospital invited Dailey to be his surgical assistant. Remaining in this capacity until 1912, Dailey learned much in the way of surgical technique from Williams. From 1916 to 1918, he also served as an instructor in clinical surgery at Northwestern, and from 1920 to 1926, he was an attending surgeon at Fort Dearborn Hospital. In 1912 and 1925, Dailey took two trips of several months each to Europe for postgraduate studies on surgical subjects.

In February 1916, Dailey married Eleanor Curtis, sister of Dr. Austin M. Curtis* of Washington, D.C. Shortly after this, Dailey suffered an almost fatal attack of tuberculosis and was ill for several months. The couple adopted five-year-old twins in 1924.

In 1926, Dailey purchased two large houses at Michigan Boulevard and Thirty-seventh Street and had them remodeled into the Dailey Hospital and Sanitarium, free from racial restrictions. Unhappily, one of his patients there was Daniel Hale Williams, for whom Dailey had to make a terminal diagnosis. The economic depression forced Dailey to close this institution in 1932. During its existence the hospital had provided affiliations for young black specialists and excellent care for black patients.

From Williams, Dailey had learned the importance of surgical clinics and educational lectures for black surgeons in the South. He frequently organized and took part in such endeavors at Meharry Medical College in Nashville, Tennessee, the John A. Andrew Clinical Society in Tuskeegee, Alabama, and other southern locations as well as in Washington, D.C., and New York.

In 1945, the American College of Surgeons elected Dailey a member (along with three other black surgeons). The only previous African-American members had been Dailey's mentor, Williams in 1913, and Louis Tompkins Wright in 1943. 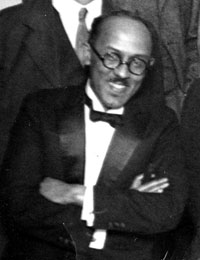 Dailey became a member of the National Medical Association in 1908 and remained a member for fifty-three years. Active at the annual meetings as a speaker and discussant, he served as chairman of the Surgical Section in 1914 and gave the Oration in Surgery in 1940. From 1928-1932 he was chairman of the National Program Committee, and in 1932 presented one of the association's first scientific exhibits (on sixty operations for goiter). As president of the association in 1915-1916, Dailey was the youngest president up to that time and the first from Chicago. However, his primary activity was with the Journal of the National Medical Association, for which he served as a member of the editorial board (1910-1943), associate editor (1943-1948), and editor (1948-1950). In 1950, he was named consulting editor. He also wrote several columns for the journal, alternating reviews of the literature with reports of his own work. The association honored him with its Distinguished Service Award in 1949.

In 1935, Dailey became a charter member of the International College of Surgeons. He served on the board of trustees and the editorial board. His major efforts for the college consisted of several extended trips to Pakistan, India, Japan, and other countries, during which he gave frequent surgical lectures and clinics and promoted local efforts for undergraduate and graduate medical education. A high point of his travels was a five-day visit with Albert Schweitzer in 1953 at Schweitzer's Forest Hospital in Lambaréné, Gabon.

In 1952, Dailey retired from his position as chief of the surgical staff at Provident Hospital, and four years later he retired from active practice. He and his wife purchased a house near Port-au-Prince in Haiti, a country they had often visited and for which he had served as honorary consul in Chicago for several years.

Northwestern University awarded Dr. Dailey an honorary Doctor of Laws degree in 1955. He died in Chicago in 1961.