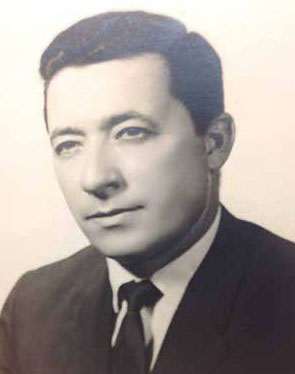 Luis Rubén Soltero Harrington was born on September 4, 1925, in San Juan, Puerto Rico, to Augusto Soltero, who owned a ranch and an insurance company, and Ana Harrington, whose father was from Boston, Massachusetts. He received a degree in agronomy from the Colegio de Agricultura y Artes Mecánicas de Mayagüez, where he was a member of Phi Delta Gamma, the first Puerto Rican Greek fraternal organization. He received a scholarship to study at Northwestern University Medical School and earned his MD in 1951 after an internship at Michael Reese Hospital. Image at right: Soltero Harrington from Galenus 68, no. 1 (año 11): 56.

Soltero Harrington returned to Puerto Rico, where he worked as a surgeon at the Hospital de Distrito de Aguadilla. He then joined the United States Army and was stationed in Texas. After completing his military service, he stayed in Texas and became a resident in cardiovascular surgery at the Baylor College of Medicine with world-renowned heart surgeon Michael DeBakey, MD. During this time, he also worked with Denton Cooley, MD, another prominent heart surgeon, at the Texas Heart Institute, within the Texas Children's Hospital and St. Luke's Episcopal Hospital in Houston. According to his obituary in a Puerto Rican medical journal, Soltero Harrington distinguished himself during his five years in Houston and participated in thousands of cardiac operations. It was during this time that he also met Joyce Carpenter, an anesthetist from Canada who operated the heart pump for DeBakey during his surgeries. Soltero Harrington and Carpenter were married in 1958.

Soltero Harrington continued to distinguish himself throughout his career. In 1960 he introduced a technique of pulmonary artery banding to alleviate heart failure so that infants could be operated on with less risk. Three years later he became the first surgeon in Puerto Rico to implant an artificial mitral valve in a child; he performed a similar operation on an adult later that year. That same year he also joined the staff of Hospital El Maestro, a hospital that had been started by the Puerto Rico Teachers Association in 1959, where he did many types of surgery, particularly cardiovascular, thoracic, and oncological. He also put his expertise to use in the 1980s when organizing a group of specialists to work at the Regional Hospital in Bayamón as part of an effort to reform healthcare and help staff regional hospitals in Puerto Rico.