Marisa and Max Ramírez de Arellano were a pioneering couple who each held multiple degrees from Northwestern University Medical School and who with each other left a mark on their home of Puerto Rico. Their intertwined biographies are presented here together.

María Isabel Robert, known as Marisa, was born on October 9, 1915, in Guaynabo, Puerto Rico, to parents who were both teachers-turned-pharmacists. An article published in Northwestern magazine in 2015 explained that she “learned early on to doggedly pursue her passions” when her father insisted she be allowed to move to a shop class when she was unhappy in her middle school home economics class. This determination would be put to good use throughout her life. 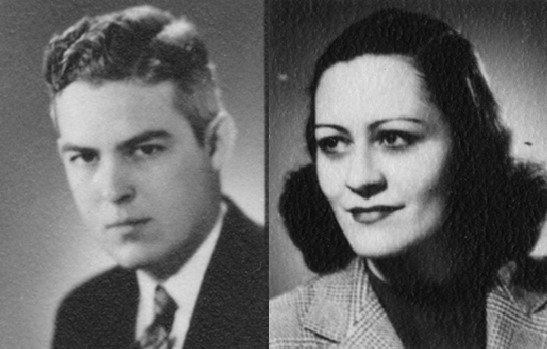 Max Ramírez de Arellano was born on April 26, 1916, in Brunswick, Georgia, to a Puerto Rican father and an American mother. His father Rafael was a professor at the University of Georgia, and his mother Lucille had met Rafael in Puerto Rico after moving there to teach English in the early 1900s. Before 1930 the family had returned to Puerto Rico where both parents became professors at the University of Puerto Rico at Rio Piedras. Image at right: Max’s medical school class of 1941 portrait and Marisa’s medical school class of 1951 portrait, Galter Library Special Collections.

Marisa and Max met each other in a high school summer class in 1931 and were married in 1938. They would go on to have three children – Max, born in 1943; Marisa, born in 1946; and Maxine, born in 1948. During this time, both Marisa and Max were accumulating degrees from Northwestern University Medical School. Max earned an MS in 1940, his MD in 1941, and two GMEs (Graduate Medical Education) in 1947 and 1953, after residencies in surgery and neurosurgery, respectively. He completed his internship at St. Joseph Hospital in Chicago and served in the Army Medical Corps during World War II. Marisa’s accomplishments were recognized in a 1950 Chicago Sun-Times article that described how several authorities at Northwestern had tried to discourage her from entering the medical school while taking care of young children. Despite this, and with her husband’s support, she received her BS in 1942 and earned three more degrees as her children were born: an MS in 1945, a PhD in neurology in 1949, and an MD in 1951. After receiving her MD, she completed her internship at Wesley Memorial Hospital.

In 1953 the Ramírez de Arellano family returned to Puerto Rico and settled in San Juan, where Max and Marisa went into private practice together, as a neurosurgeon and a neurologist, respectively, something they had planned since Marisa received her MD in 1951. Max was among the first generation of neurosurgeons in Puerto Rico and Marisa established the first electroencephalography lab on the island. Their work included studies of epilepsy and research in the National Institute of Neurological Diseases and Blindness Laboratory of Perinatal Physiology, where Marisa served as Interim Director and then Director. They also worked at the University of Puerto Rico Medical School and the Veterans Hospital, and frequently traveled abroad as part of their work with the National Institutes of Health.

The couple’s dedication to each other in addition to their commitment to their education and professions is clear. They each left a legacy at Northwestern, from which their children Max and Maxine also received degrees, and in Puerto Rico, where they were pioneers in their respective fields. Max died in 2007 at age 91, in San Juan, and Marisa passed away 10 years later in 2017 at over 100 years old.