Salvador Castañares was born on January 31, 1908, in Monterrey, Mexico, to Ernesto, a dental surgeon, and Aurora Castañares. In 1923 he came to the United States and worked as a janitor in exchange for a high school education at Columbia Military Academy in Columbia, Tennessee. By 1930 he was attending Northwestern University as a pre-medical student and working as a medical clerk at Evanston Hospital; he received a BS from Northwestern in 1931. He then attended Northwestern University Medical School where he worked as a student instructor in anatomy and received his MD and MS in anatomy in 1936. Image at right: Castañares’s medical school class of 1936 portrait, Galter Library Special Collections. 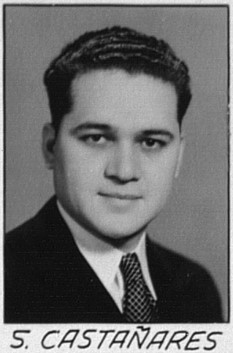 After serving as an intern at the California Medical Center in Los Angeles, Castañares worked for the Pacific Electric Railroad Company, which provided a four-year rotating general surgery preceptorship in the company’s hospital in Los Angeles. In 1941 he became a naturalized citizen of the United States and married Doris Thurber, the daughter of a California surgeon, with whom he had three children: Tony, Dennis, and Tina.

From 1942 to 1946, Castañares served as a flight surgeon in the Army Air Corps at base hospitals in Morocco, the Middle East, and Europe. According to his obituary in the journal Plastic and Reconstructive Surgery, he was selected to lead nine other physicians on a secret mission in Africa and was assigned to the Office of Strategic Services (precursor of the Central Intelligence Agency) for other missions. He was evacuated to the United States in 1944 after an injury and spent the rest of the war as a base surgeon at Romulus Air Base in Detroit.

In 1946, Castañares began to train as a plastic surgeon: in a preceptorship with H. O. Bames, a pioneer of plastic surgery in Los Angeles, and in a two-year residency in reconstructive surgery with Milton Dupertuis at the University of Pittsburgh. By the 1950s he had returned to Los Angeles and established a private practice at Good Samaritan Hospital, where he eventually became the Chief of the Plastic Surgery Division. He made major contributions to the field of cosmetic surgery, particularly a 1951 article, “Blepharoplasty for Herniated Infra-Orbital Fat: Anatomical Basis for a New Approach,” which his obituary described as “pivotal in establishing the essential and fundamental appreciation for the anatomy and surgical approach to cosmetic eyelid surgery.” 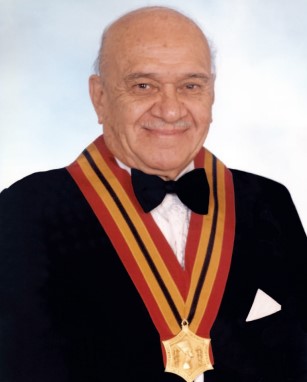 The lasting effects of his war injuries forced Castañares to retire from private practice in 1973 but he remained active in education and research. Through the 1970s he was a member of the faculty of the University of Southern California School of Medicine and a visiting professor at the International Society of Aesthetic Plastic Surgery. He also continued publishing, including articles “Ethics in aesthetic surgery” (1976) and “The lateral fat compartment of the lower eyelid” (1983) in the journal Aesthetic Plastic Surgery.

Salvador Castañares died in Los Angeles on March 19, 2005, at the age of 97. In 2016, his daughter Tina Castañares, MD, a family medicine practitioner, established the Salvador Fund in his honor, which awards small grants to non-profit organizations that serve the interests of immigrants, migrants, farmworkers, elders, and caregivers in Oregon and Washington. As Garry S. Brody, MD, wrote in Castañares’s obituary: “[he] was an inspiration to all who knew and worked with him.”