In the Spring of 2021, Galter Library was selected to receive a Recordings at Risk Grant from the Council on Library and Information Resources (CLIR) to support its project "Medical Education on Film: Preserving the Medical Motion Pictures (1929-1959) of Northwestern University Feinberg School of Medicine." Over the past year our Special Collections department has collaborated with Galter staff and external library partners to digitize the collection and make it discoverable online to researchers and library patrons. 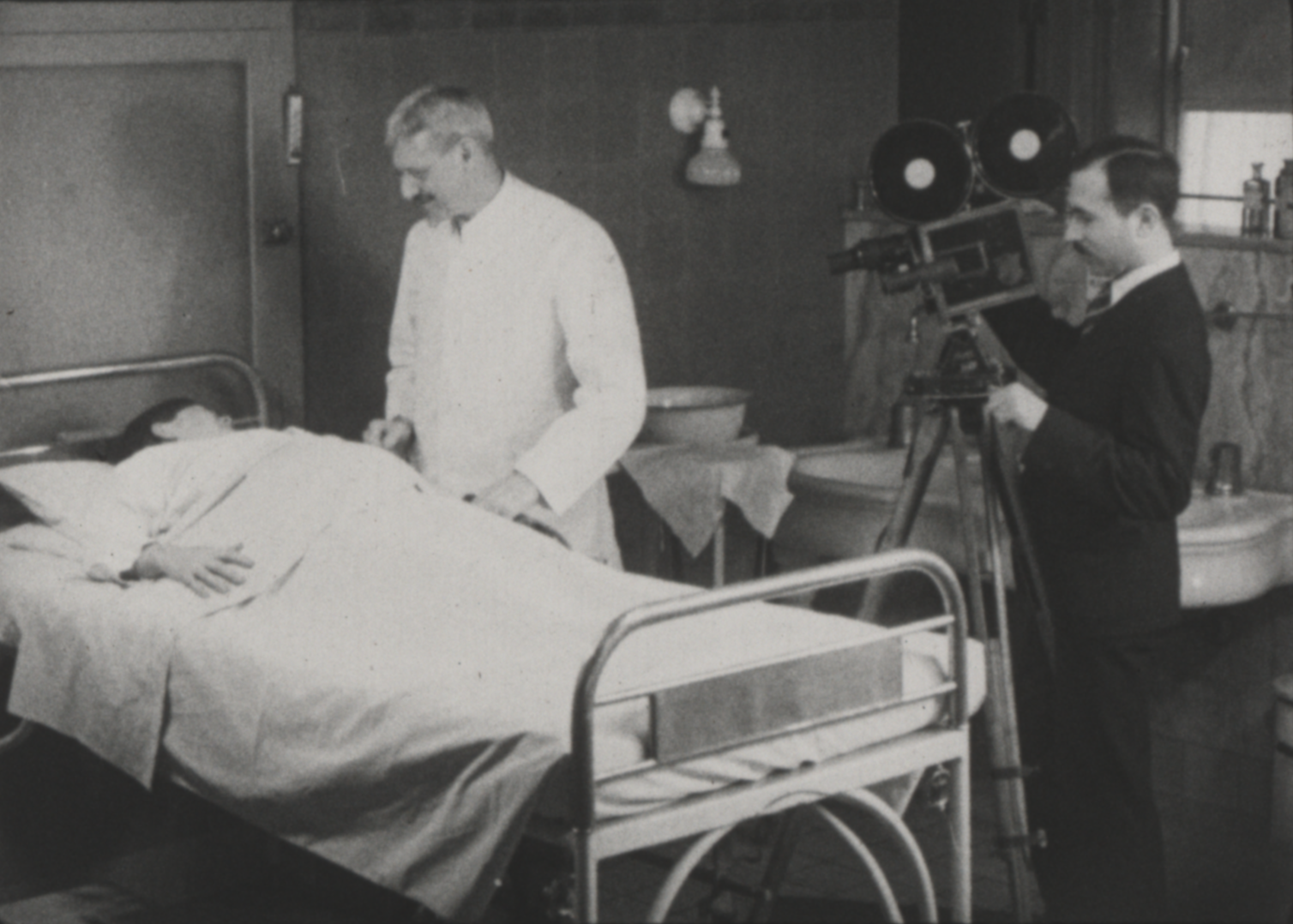 We are excited to share that this film collection has been fully digitized and processed. The educational films, contemporaneously known as medical motion pictures, depict surgeries, procedures, conditions, and research spanning 1928 to 1963 in 10 health sciences fields, including anatomy, pathology, obstetrics, otolaryngology, and surgery. The influence of these films extends beyond Northwestern and the Chicago region as they were rented out to other medical schools, informing medical education and innovation across the country. In addition to medical motion pictures, archival footage and other films related to medicine and dentistry were digitized. These films include the earliest known footage of the Northwestern medical and dental schools, early international congresses that include footage of groundbreaking scientists and physicians, and more. Image at Right: Joseph De Lee, MD with a patient in Northwestern Marches On, circa 1929.

These collections represent some of the few medical film collections available online showcasing the culture of medical school and the greater medical profession in the pre-and post-war United States, making its preservation a high priority. The films offer scholars and students a rare look at the intersection of science and story in educational film, a valuable resource in the fields of history of medicine, medical humanities, and bioethics. This project has not only revealed a hidden collection of primary sources, but has granted critical insight into the instruction, research, and practices of a time when significant shifts were being made throughout the medical field.

A few films are now available online in the Medical Heritage Library collection. As more films are uploaded online, we will continuously update the finding aids so patrons can directly connect to each film. Due to restricted content, some films will only be accessible onsite at Galter.

This project would not have been possible without the support of the Council on Library and Information Resources (CLIR), an independent, nonprofit organization that forges strategies to enhance research, teaching, and learning environments in collaboration with libraries, cultural institutions, and communities of higher learning. We also want to extend our gratitude to Roderick McNealy for his generous donation, Caitjan Gainty for her enthusiastic letter of support, Catherine Belling and Sarah Rodriguez of Northwestern’s Center for Bioethics and Medical Humanities for their practical advice, the Office of General Counsel, the Office of Sponsored Research, and all others who helped make this possible. Special thanks to project members Matt Carson, Mahonry Estrada, Emma Florio, Dave Heckler, Mohammad Hosseini, Gretchen Neidhardt, Joelen Pastva, Austin Sharp, Liping Song, and Emma Wilson.

This collection consists of 44 medical motion pictures made between 1928 and 1963, most of which were created by Northwestern University Medical School faculty members. It is arranged in 10 series by subject area, which corresponds to respective departments in the medical school.

This is an artificial collection of 8 films created by or collected by Northwestern University Medical School, spanning the years 1929 to 1959. It includes both unedited footage and produced films.

This is an artificial collection of 6 films created by or collected by Northwestern University Dental School, spanning the years 1929 to circa 1947. It includes both unedited footage and produced films that relate to the cultural and institutional history of the dental school.

This is an artificial, ongoing collection of audio materials created by or collected by Northwestern University Medical School.