In honor of National Women's History Month, we are taking a closer look at some of the graduates of Northwestern University Woman’s Medical School (1870-1902)* 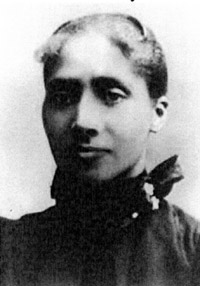 Emma Ann Reynolds, MD (1862-1917) was a graduate of Wilberforce University and the Provident Hospital Training School for Nurses (1892), and received her MD in 1895 from the Northwestern University Woman's Medical School. Following graduation, she was the superintendent of the Training School for Nurses, 1895-1896. She was appointed the physician in residence at Paul Quinn College in Waco, Texas in 1897. In 1900, she moved to New Orleans, Louisiana and practiced medicine there until 1906 when she re-located to Ohio for personal reasons. By 1910 she had established a private practice in Sulphur Lick, Ohio, providing much-needed services to the rural residents of Ross County until her death in 1917.

Dr. Reynolds' brother, the Reverend Mr. Louis Henry Reynolds was pastor of St. Stephen African Methodist Episcopal Church on Chicago's west side.  Through his efforts and friendship with Dr. Daniel Hale Williams, the Provident Hospital and Training School for Nurses realized his dream and began his sister’s medical career. 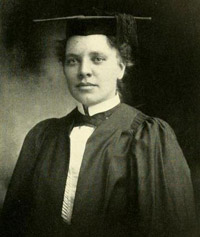 Julia L. Woodzicka, MD, (1865-1948) was born in Royalton, Wisconsin to Polish immigrants. In 1894, at the age of 29, she entered the Northwestern University Woman's Medical School graduating in the Class of 1899. After receiving her medical degree she became affiliated with the Kirkland Free Dispensary in Chicago. She opened a private practice in Sheboygan, Wisconsin in 1900 before relocating to Royalton in 1903 where she opened a private practice and assumed care for her ailing mother. After her mother's death in 1910, she traveled extensively throughout the United States and settled in Eugene, Oregon as a hospital physician. In 1920, she moved back to Royalton and set up practice in New London, Wisconsin.

Using the proceeds from the sale of land she had purchased in Oregon and California Dr. Woodzicka purchased a large house in New London in 1927 with the hopes of converting it into a maternity hospital. Her hospital was not a success. In 1932 the property was sold and she continued with a private practice in New London. In 1942, Dr. Woodzicka retired and returned to her home in Royalton where she continued to study and stay informed about the medical field. She was interviewed by the Medical Women's Journal in 1942 and enjoyed talking about her early days of medicine and the challenges she faced. Dr. Woodzicka died of a heart failure on February 22, 1948.** 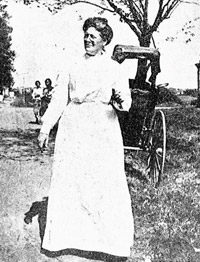 Lucy Alice Gaynor, MD, was born in 1861 in Ballygarry, Ireland and immigrated to Chicago after her father’s death in 1870. In 1891, she graduated with honors from the Woman’s Medical College of Chicago and secured a coveted internship at Chicago Ear and Eye Infirmary.

Dr. Gaynor embodied the “New Woman” concept of the late Victorian era, which described an independent-minded woman who rejected traditional roles of wife and mother, and embraced social activism. Foreign missionary work provided an exciting opportunity to right social injustice. The feminization of mission work in the late 1880’s resulted in many successful female-led missionary boards. These boards provided a robust support base for field workers, offering financial, emotional, and academic reinforcement. Dr. Gaynor was endorsed by the Friend’s Missionary Board and in 1892 sailed to Nanking, China to begin two decades of missionary work as its first female physician.

Following the Boxer rebellion of 1900, the Qing Dynasty became more tolerant of Western influence, and women missionaries used this opportunity to encourage the secondary education and college education of Chinese women. In 1907, Dr. Gaynor was approached by many young Chinese women asking to be trained in medical work. She quickly established the Nurses Training School in Nanking and assumed the entire responsibility of their training. Dr. Gaynor financially mobilized other missionary boards to support this intervention, and with this combined support, the school was renamed the Union Nurse School. Her vision was to further expand with a medical school for women. In addition, Dr. Gaynor opened the Friend's Hospital in Nanking and the Red Cross Hospital in Shanghai.

In spite of great suspicion under which most foreigners were held during this time of political unrest in China, the trust the community had for Dr. Gaynor was profound.  She comforted, healed, and tirelessly served in the name of Christ. In addition to her medical service, correspondence to the Woman’s Medical College alludes to her adoption of several abandoned infant girls. Her love for her community was clearly witnessed with the Fall of Nanking and the Qing Dynasty in 1911. After 3 days of bloody revolution, Dr. Gaynor returned to Manchu City against collegial advice to find 7,000 slaughtered Manchurians, and 3,000 left homeless. She opened a field hospital supported by Chinese cloth merchants to care for the sick. After four months of diligent post-revolutionary service, she succumbed to typhus and died in the Friend's hospital she had founded. Her memorial document references the grief of the community at her death and notes her “clean pure buried bones” will be “a root source of virtue” for “a thousand autumns.”***

*A Brief History of Co-Education at the Medical School

**Special thanks to Christine Cross, Director, New London Public Museum, New London, Wisconsin for her inquiry of August 9, 2009 and contributions for this brief biography.

***Lucy A. Gaynor, M.D.: Memorial. Nanking, Board of Managers of the Nanking Union Training School for Nurses, 1912.

Special thanks to Drs. Mary Groll and Amy Whalen for their continuing interest in women pioneers in medicine.

Historical items including books, photographs, instruments and equipment are available for study and viewing. Please call (312) 503-8133 or email for an appointment with the Special Collections Librarian