This is the second installment in a multi-part series on the history of Northwestern University's medical school. 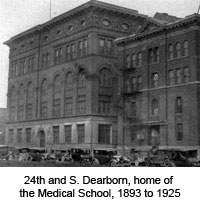 The fall session of 1893 saw the medical school in new buildings on S. Dearborn and 24th Streets.  Wesley Hospital, which had been founded in 1888, was nearby. Four years of medical study was made obligatory and the school year was lengthened to eight months. Practical, systematic and required courses in clinical laboratory methods were inaugurated in 1899, which was another first in medical education in the United States.  Courses in chemistry, pathology, physiology and bacteriology were added during this time. Full time professorships were established, with their incumbents teaching exclusively.  All the fundamental departments of instruction were placed in the hands of instructors sufficiently paid to enable them to devote their time to the institution. 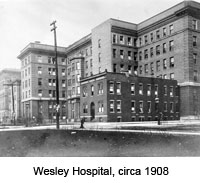 Numerous small bedside and dispensary clinics were established so that each student in the junior and senior year received one to two hours of individual instruction daily. Gradually the admission standards were raised from one year of completed college to two years by 1918.

The 1910 Flexner report on medical education was fairly kind to Northwestern, noting the loosely enforced college work requirement, funding and pedagogical control problems. Each time the admission standards were raised, applications fell off, but within a few years the applicants returned and generally surpassed the previous enrollment figures.

In 1911, the trustees approved a six year course of study leading to both a Bachelor of Science and an MD degree to encourage adequate premedical training. A compulsory fifth year of internship, either in a hospital or a research laboratory, was instituted in 1915. 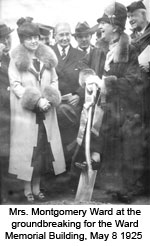 During World War I, the medical school responded to the appeal for more hospital facilities by organizing the Northwestern Medical Corps Hospital Unit no. 12, which treated casualties at a field station in Étaples, France. Postwar saw growth in the professional schools of medicine, dentistry, law and commerce.

Through the vision of Walter Dill Scott, president of the University, land was purchased on Chicago Avenue and Lake Shore Drive to consolidate these schools on a single campus.

With a generous gift from Mrs. Montgomery Ward in 1923, construction began on a new building to house the medical and dental schools and create a medical center.

The story of Northwestern University's medical school will continue in future issues of Library Notes. Catch up on the first installment in this series, Founding and Early Days.