This is the first installment in a multi-part series on the history of Northwestern University's medical school.

This year marks the 150th anniversary of the founding of the Medical School.  Originally the Medical Department of Lind University, the founders established the school in an effort to reform and raise standards for medical education.  Included in their campaign were higher entrance requirements, longer terms of study, more diverse subjects, and a graded curriculum. 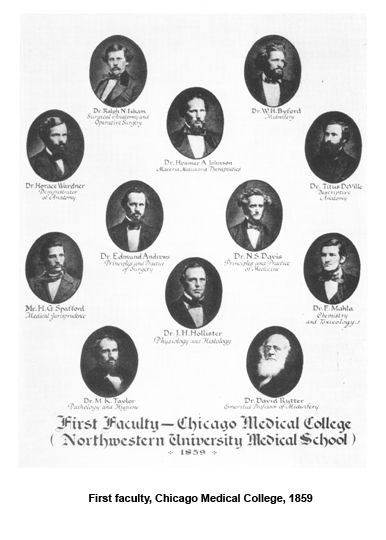 The first informal meeting for the school's establishment, held on March 12, 1859, included a number of prominent and scholarly physicians of Chicago. Several of them held important positions in the faculties of other medical colleges and all were well qualified to propose a new institution upon a broad and enduring foundation. Present at the first meeting were Drs. Hosmer A. Johnson, Edmund Andrews, Ralph N. Isham and David Rutter.  The object of the first meeting was to organize a medical department for Lind University in response to a proposition made to them by the trustees of that institution. Dr. Johnson was elected the chairman.  Under conditions imposed by the University, it would provide rooms for medical instruction free of rent for three years, after which a permanent building or suitable rooms for the medical department would be forthcoming.  All fees were to be paid to the University and instructors in the department were to be nominated by the faculty and appointed by the board of trustees.  Degrees were to be conferred by the University upon recommendation of the medical faculty.

Accepting the conditions from the University, professorships were established in Midwifery and Diseases of Women and Children (Rutter); Physiology and Histology (Johnson); Practical Medicine, Principles and Practice of Surgery (Andrews); Surgical Anatomy and the Operations of Surgery (Isham); Descriptive Anatomy; Materia Medica and Therapeutics; Medical Jurisprudence; Inorganic Chemistry; General Pathology and Public Hygiene; and Organic Chemistry and Toxicology.

It was further resolved that Drs. Johnson, Andrews and Isham would recruit and offer positions in Practical Medicine (Nathan S. Davis); Obstetrics and Diseases of Women and Children (William H. Byford); and Materia Medica and Therapeutics (John H. Hollister).  These three gentlemen completed the original organizing faculty of the medical school.

The March 24th meeting of 1859 elected Hosmer A. Johnson President of the faculty, Ralph N. Isham Recording Secretary, William H. Byford Corresponding Secretary and Edmund Andrews Treasurer.  The Faculty reaffirmed its desire to maintain high standards and allow only those who successfully completed the demands of the course work to graduate and assume the responsibilities of their profession. 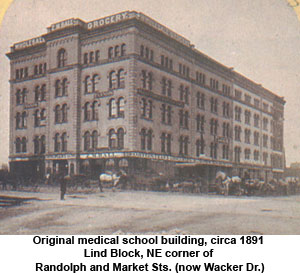 Throughout the summer months of 1859, organization continued, locating the medical school in the Lind Block at the northeast corner of Randolph Street and Market Street (now Wacker Drive).  A dispensary was established, which served more than 3,000 patients the first year.  Lecture and anatomical rooms were outfitted and a small museum was established for illustrative purposes. In connection with the first course of lectures, Drs. Davis and Andrews prepared two clinics, including one daily bedside lecture at Mercy Hospital and two weekly lectures at the school.

The opening ceremonies were held on the evening of October, 10, 1859, with an inaugural lecture by Dr. Davis.  The term opened the next day and terminated on March 5, 1860.  There were thirty three students in attendance and eleven received an MD, nine of whom were admitted with advanced standing and two were "ad endum" degrees.

The Civil War caused bank insolvency and the Trustees of Lind University were unable to fulfill their obligations with the Department of Medicine.  As a result, the Faculty reorganized in 1863 and incorporated itself as an independent organization under the name of Chicago Medical College.  The College relocated on State Street near 22nd Street. 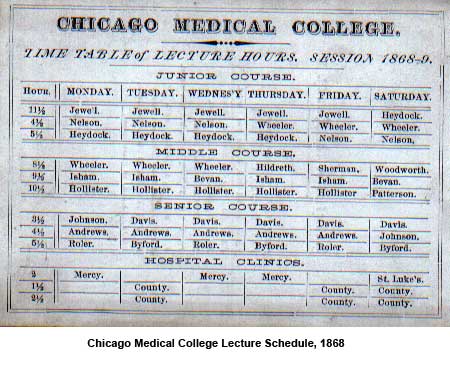 At the new location, the College continued its work and steadily increased its educational facilities, extending the curriculum and maintained the higher standards for both admission and graduation.  In 1868, the two year course of studies was lengthened to three years.  No other medical school in the country had adopted so complete and extended a curriculum of study.

In 1869, while retaining the name of Chicago Medical College, an affiliation with Northwestern University was instituted.  Under the terms of the alliance, the medical degrees were issued by the University on the recommendation of the medical faculty.  Undergraduates from the College of Liberal Arts were also to have access to the laboratories and instruction in the medical department without payment of full lecture fees.

In 1870, ties with Mercy Hospital were strengthened when the medical college moved to new quarters next to the Hospital at 26th and Prairie Avenue.  Mercy had been the teaching hospital since the early days of its existence, under the wise guidance of the Sisters of Mercy and N. S. Davis. The new facilities included two large amphitheaters, allowing two lectures at the same time, in addition to well lit and airy dissecting rooms, a museum and a library.  A public dispensary was located in the lower level of the college building. Clinical classes were distributed among Mercy, St. Luke's and Wesley hospitals.  A fourth year of instruction was added and a longer academic year was instituted, from six months to eight months.

A post graduate course was established in 1880, called the Practitioners' Course.  The course was designed for the benefit of practicing physicians and given during the inter-sessions of the regular college course. This pioneering effort, the first of its kind, only ran six years. It should be noted as a precursor of postgraduate instruction and today's continuing education.

In 1890, Northwestern University purchased a tract of land at 24th and Dearborn Streets. A new building was erected where the medical, dental and pharmacy schools shared space.  A new pavilion for Wesley Hospital was also erected in the same block.  Other buildings followed.

In 1906, the name of the school formally became Northwestern University Medical School and the Chicago Medical College surrendered its charter.

The story of Northwestern University's medical school will continue in future issues of Library Notes.