This is the third installment in a multi-part series on the history of Northwestern University's medical school.

Northwestern University's professional schools—Medical, Law, Commerce, Dental, and Pharmacy*—were originally founded as separate schools and scattered in various locations throughout the city of Chicago. In 1902, with the exception of the Medical School, the schools were consolidated in a single Loop location in the Northwestern University Building (formerly the Tremont House) at Dearborn and Lake Streets. In 1915, the University began looking for land to construct a new campus that could accommodate all the schools in their own specialized buildings in one central location.

back to top
Through the efforts of university president Walter Dill Scott and the “Campaign for a Greater Northwestern” in 1919, the University purchased nine acres of land along Lake Michigan in the near north side Streeterville neighborhood. University architect, James Gamble Rogers created a master plan for the major buildings to be erected there. Rogers’s commission for the Chicago campus in 1922 was the first of many projects for Northwestern. Working in what became his signature “collegiate gothic” style, Rogers combined medieval ornamentation and forms with the requirements of modern buildings to create structures that captured the ambience of old English universities in American settings. The original plans included a high tower and adjoining hospitals, with Superior Street as a dead end at Fairbanks Court, giving two full blocks to the new structures.  The architect’s vision was to have low buildings rising from Lake Shore Drive with the medical center building as the pinnacle of the complex. The construction, in concrete on a steel framework, would have an exterior of grey Bedford stone with Gothic decorations.

Rogers also designed the Deering Library and Dyche Stadium on the Evanston campus and Wieboldt, Levy Mayer and Abbott Halls on the Chicago campus.  Other notable designs by Rogers are at Yale University, his alma mater (1889), and include the Harkness Quadrangle and Sterling Library. 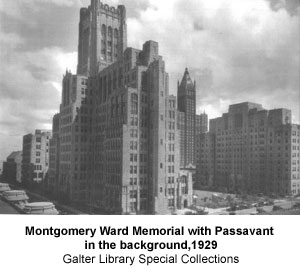 Between 1923 and 1926, Mrs. A. Montgomery Ward gave the University just over eight million dollars for the medical center building in memory of her husband, Chicago mercantile giant, A. Montgomery Ward, who had died in 1913. Her gifts were also used as endowments for public clinics, faculty chairs, research grants, scholarships, and building maintenance.

Groundbreaking ceremonies for the entire Chicago campus took place on May 8, 1925. Construction began that fall and the cornerstone was laid on June 11, 1926. On June 16, 1927, day-long dedication events were held that included tours of the new building, a luncheon for alumni, a formal reception with speeches by dignitaries, and an evening banquet.

Built to house the medical and dental schools, the new medical center building, the Montgomery Ward Memorial, was the first “skyscraper” medical center in the world.  Rogers was also the architect for Columbia University College of Physicians and Surgeons in New York, the second skyscraper medical center.

Previously an all male bastion, the new campus provided the opportunity for the medical school to become co-educational.† The announcement that women would be admitted was made on May 31, 1924 and the first women students matriculated in the fall of 1926.  A quota of four women students was set for admission -- four being the number needed for an anatomical dissecting team. This quota of four persisted until the late 1960s!

Hospitals on the New Campus

Rogers’s plans for hospitals on the new campus did not materialize during his tenure as University Architect.  By the spring of 1927 plans were well under way for the construction of Passavant Hospital which was to be located adjacent to the Montgomery Ward Memorial.  Teaching hospitals were needed to provide practical laboratories for medical and dental students, noted President Scott.  Plans were further announced to develop the “greatest medical center in the country,” which included four new hospitals (in addition to Passavant), a training hospital for nurses, a maternity hospital, a children’s hospital and a hospital for patients with industrial injuries. Wesley Memorial Hospital opened a new building on the Chicago campus in 1941, furthering the dreams and plans of the University’s administration.

The curriculum was static through most of the first half of the 20th century.  Adequate collegiate preparation in physics, general chemistry and biology were assumed as part of the admission process.  The first two years were devoted to the study of the fundamental or laboratory branches of medicine.  In addition to the purely laboratory exercises, certain intermediary courses, such as physical diagnosis, were introduced in the sophomore year which were designed to provide actual practice in the application of the preclinical sciences.

In the third year, principles of medicine, surgery, gynecology, and obstetrics were studied in recitations, in clinics offered to small groups, in section work in the dispensary, and in general clinics.  The course in laboratory diagnosis followed the advances in medicine closely and was accompanied by quizzes and demonstration on nervous diseases, gynecology, eye and ear, nose and throat, surgery, internal medicine, urology, dermatology and diseases of children.

The War Effort and Beyond 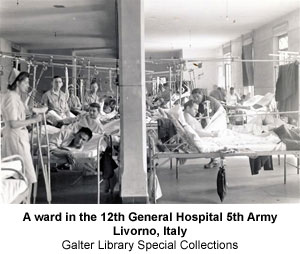 During World War II, the 12th General Hospital was mustered from the ranks of faculty and students of the medical school, with an accelerated three year medical program to aid in the nation’s war efforts.  Initially stationed in Algeria, the hospital was then set up in Livorno following the invasion of Italy.

In the aftermath of the war there were new medical needs to be met and in 1946, the medical school cooperated with the University of Illinois College of Medicine to organize the Hines and Vaughan veterans’ hospitals. The new affiliation with Children’s Memorial Hospital established three new departments: experimental medicine, institute of rheumatic fever and a department of nutrition and metabolism.  Curricular changes included a greater emphasis on personal instruction in the clinical departments. 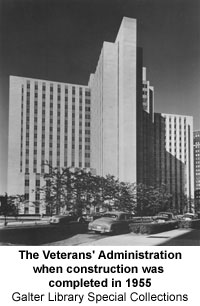 The new dean, J. Roscoe Miller (MD 1929), stressed the need for additional institutes, hospital facilities and programs, including a central school for nursing. Many of these proposals and programs were incorporated in a plan for a medical center announced in 1946. In 1955 the Morton Medical Research Building as well as the Veterans Administration Research Hospital opened, signaling the changes that were to come in the last quarter of the 20th century.

*The Northwestern University School of Pharmacy, also known at the Illinois College of Pharmacy (incorporated in 1886), terminated its affiliation with Northwestern in June 1917 and affiliated with the program at the University of Illinois.  This action was primarily due to low enrollment and an operating deficit.

† A separate medical school for women, known as the Northwestern University Woman’s Medical School (1870-1902), was founded by Dr. Mary Harris Thompson and other enlightened Northwestern University Medical School male faculty, including Dr. William Heath Byford. The School was associated with the Woman’s and Children’s Hospital, founded by Dr. Thompson in 1865.

The story of Northwestern University's medical school will continue in future issues of Library Notes. Catch up on previous installments: Founding and Early Days and Early 20th Century Progress.