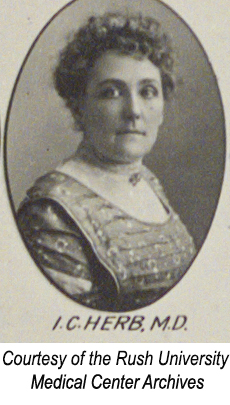 Isabella Coler Herb, MD was born in Clyman, WI. She married musician Charles Albert Herb, who lived in Houston, TX, but in 1888, after only a few years of marriage, her husband was killed in an accident. She began her medical studies at the Woman’s Medical School in 1889, graduating in 1892.

Initially after graduation, she was an anesthetist and pathologist at Augustana Hospital in Chicago, working with Lawrence Prince, MD, the major developer of open drop ether and chloroform anesthesia. In November 1899, she moved to Minnesota where she became a member of the staff at the Mayo Clinic in Rochester, serving as the first female physician anesthetist for Charles Mayo, MD (a Northwestern University Medical School alumnus, class of 1888) and as a clinic pathologist.

In 1904, Dr. Herb left Mayo Clinic and went to Europe for further study. When she returned to Chicago, she began work at Rush Medical College in 1905 as a Fellow in Pathology. On a grant from the American Medical Association, she worked with microbiologist Ludvig Hektoen, MD at the Memorial Institute for Infectious Diseases. In 1909, Arthur Dean Bevan, MD, the head of surgery at Presbyterian Hospital and Rush Medical College, offered her the position as head of the department of anesthesia at Presbyterian Hospital, making her the first woman on staff. In this position, Dr. Herb became a leader in the field of medical education and advocated the need for a stronger anesthesia education program.

She designed the Herb-Mueller ether vapor and vacuum apparatus (Mueller was the manufacturer’s name) that was introduced around 1933. Over the years, Dr. Herb published in the professional medical literature on topics in anesthesiology and pathology, including the early “Observations on One Thousand Consecutive Cases of Anesthesia in the Service of Dr. A. J. Ochsner” (The Chicago Medical Recorder 15:397-401, 1897) and later, “The Anesthetic Problem in its Relation to the Hospital” (Anesthesia and Analgesia 5(1): 13-15, February 1926). She wrote various book chapters, including one on general anesthesia in the popular textbook Oxford Loose-Leaf Surgery. Dr. Herb was very active in professional societies and received an award for her service as tenth President of the American Association of Anesthetists in 1922.

Dr. Herb remained at Rush Medical College as professor of surgery (anesthesia) until her retirement in June 7, 1941. She died in Winnetka, IL on May 28, 1943 and was buried in her hometown of Clyman, WI.

This is the first in a number of planned articles this month honoring women physicians from Northwestern University Woman's Medical School.