In honor of Women's History Month, throughout March we will be taking a closer look at pioneering women physicians who attended Northwestern University Woman’s Medical School (1870-1902), spotlighting a few who worked in Chicago after their studies. 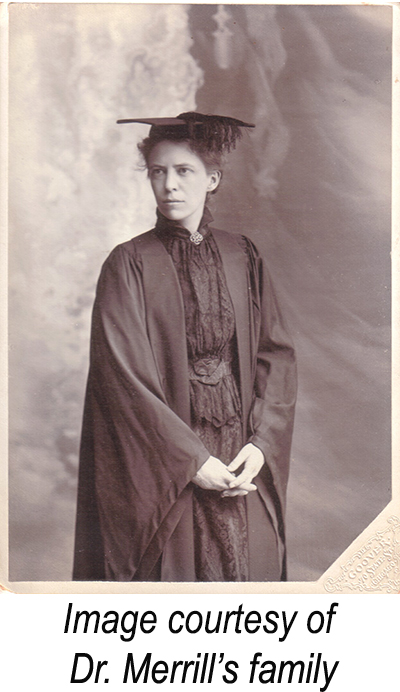 Julia Dyer Merrill, MD devoted her life to making the lives of children better. She was born in Saco, Maine, on March 11, 1861 and was educated in Saco public schools. For two years she taught school before entering a training school for nurses at New Haven, CT. Upon completion, she enrolled in a post-graduate course at the New York Lying-in Hospital. During the next two years, she served as the superintendent of the North Adams Training School for Nurses (MA). She studied medicine at Wooster University in Ohio, then moved to Chicago, transferring to Northwestern University Woman’s Medical School, from which she graduated in 1895.

Merrill served as Assistant Clinical Professor of Pediatrics at Rush Medical College from 1897 to 1913. She was a member of the pediatric staff at various Chicago hospitals: Presbyterian, Tabitha (later called Norwegian-American), the Chicago Maternity, Mary Thompson, and the Maimonides (later called Mt. Sinai). She devoted her time to the Lincoln Park Sanitarium for Babies, the Jackson Park Sanitarium, and the Marks Nathan Jewish Orphanage. She was a fellow of the American Medical Association, the Illinois Medical Society, the Chicago Medical Society, the Women’s Club, the Pediatric Association, and the Association of American Teachers of Diseases of Children. Her reputation was that of a devoted physician, and as a patient, thoughtful instructor, who impressed her students with her thoroughness and conviction.

Merrill partnered with Alfred C. Cotton, MD and assisted him in the compilation of his works on the diseases of children. She was deeply committed to making milk available to children and ensuring that milk in Chicago was safe to drink and free of disease. In her role on the Chicago Milk Commission Association of the Chicago Medical Society, it was widely recognized that much of the program’s success was due to her commitment. Two different accolades in volume 26 of the Illinois Medical Journal credit her work on medical inspection of employees and making the milk industry safer:

Julia Dyer Merrill, MD died at her home in Chicago on May 18, 1914 from endocarditis, complicated by pneumonia. She was just 53 years old and her death was widely mourned. She was beloved as a “loyal and sympathetic friend, a woman of the highest refinement and nobility of purpose.” The memorial service, held by the Medical Women’s Club and Chicago Medical Society, was attended by hundreds of mourners.

Thank you to Connie Guerin, relative of Julia Dyer Merrill, MD, for providing a photograph from the family’s collection.