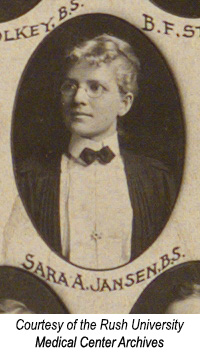 Sarah Janson was born in Albert Lea, Minnesota on September 13, 1873. Her parents, Soren and Mette, were born in Denmark and settled in Central Minnesota. The third of four daughters, Janson graduated from high school at 16, and completed a teacher’s course. She eventually became a principal in Brainerd, Minnesota. Janson attended and graduated from the University of Chicago in 1900, and began her medical education at Northwestern University Woman’s Medical School, financing her own studies. When the school was closed in 1902, she completed her degree at Rush University Medical College and graduated in 1903. From 1904 to 1908, she stayed on at the medical college as clinical assistant, clinical associate, and clinical instructor, primarily in Obstetrics and Gynecology.

Janson was considered to be a pioneer in medicine, education, women’s suffrage, and equal rights. An ardent feminist, she was a strong advocate for a college education and is credited with saying, “If you give them inspiration, they will graduate. Suffrage is a woman’s birthright. Men have not provided properly for growing generations.” Janson’s practice spanned 64 years, most of which were spent at Swedish Covenant Hospital in Chicago. A 75th hospital anniversary commemoration record shows that Janson brought her first patient there as an intern in 1901. During her career she delivered over 8,000 babies. By 1961, Janson had the dual distinction of being the only member of her Rush Medical College graduating class still alive and practicing medicine at 89 years of age. In an article written that year, the 89-year old doctor stated she didn’t plan to retire until she reached 120 years of age. She ultimately retired just a year before her death in 1969 at age 96. She is buried in Graceland cemetery in her hometown of Albert Lea, Minnesota.

Janson was married to lawyer Allister Sloan Langille from 1908 until his death in 1935. She pursued hobbies of genealogy, archaeology and geology, as well as hunting and fishing around Hudson Bay. Considered an expert in geology and paleontology, she gave merit badge advancement exams to Boy Scouts. Janson traveled extensively through Europe and took summer trips to the Arctic Circle.

It should be noted that through the years, variations have occurred in the spelling of Dr. Janson's name, including the medical school photograph above where her last name is spelled "Jansen." Also noteworthy is Dr. Janson's graduation year at Rush Medical College. 1903 was a significant year for Rush Medical College-- its first women students were accepted in 1902 (third- and fourth-year medical students only), so 1903 was the first graduating class to include women.