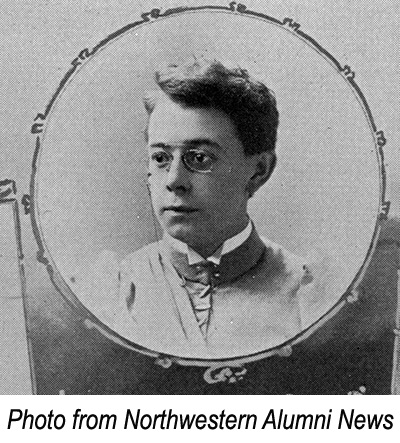 The daughter of a physician and the youngest of ten children, Vida Annette Latham was born and raised in England, attended Cambridge University from 1883-1887, and received a Master of Science degree at University of London in 1889. She immigrated to the United States, completing her dental studies in 1892 at the University of Michigan, and then moved to Chicago where she entered the Woman’s Medical School, from which she graduated in 1895.

While at Michigan, Latham was a demonstrator in pathology, bacteriology, and dental anatomy in the medical school. During her medical training, she supported herself by teaching at American Dental College, which later became part of Northwestern University. After graduating, she became Assistant Professor of Pathology and Director of the Microscopical Laboratory (1895-97). She was also the secretary of the medical staff, pathologist, and dental surgeon at Mary Thompson Hospital, and she taught at Rush Medical College and the University of Chicago. She later served on staff of Edgewater and St. Francis Hospitals. Latham shared offices with Bertha Bush, MD, a surgeon and fellow graduate of Woman’s Medical School (Class of 1889). She continued her affiliation with Northwestern where she did research with faculty member, Eugene S. Talbot (1847-1924), DDS, MD, LLD. Both Latham and Talbot were active in and presented papers on histology and pathology of oral lesions at meetings of the American Medical Association's Section on Stomatology.

During World War I, Latham interrupted her practice and research to work as a volunteer dentist for the US Marine Corps and she headed a committee for sanitary inspection of military camps. She traveled to Paris, Berlin, and Hamburg for postgraduate studies in tropical medicine and was the first woman to lecture on the topic at the Woman’s Medical College of Pennsylvania. In her free time, she created arts and crafts, was an accomplished pianist and organist, and composed a number of musical scores.

A microscopist, pathologist, and physician-dentist, Latham supported roles for women in dentistry and medicine, as well as in research. A strong believer that dentistry was a specialty of medicine, and that each profession could learn from the other, Latham actively published and presented her research late into her career. She published in medical, dental, and microscopy journals, and was associate editor of the Journal of Microscopy and Natural Science. Her professional activities and accolades were wide-ranging. In 1893, she was vice president of the Dental Congress, held as part of the World Columbian Exposition in Chicago. She was a fellow of the Royal Microscopic Society, and was vice president of the American Microscopical Society (1904-1905). She was secretary and president (1932) of the Microscopical Society of Illinois, which in 1936 recognized her work with a testimonial dinner. She was elected president of the Woman’s Medical Club of Chicago in 1933. In 1957, she was one of four to receive a merit award of the Chicago Technical Societies Council, and the Zonta Club, a club of professional women, named her Medical Woman of the Year. At the time of her death just weeks before her 92nd birthday, the Chicago Sun-Times commented on her medical science career of over 65 years by calling her “one of Chicago’s oldest practicing doctor-dentists." Delta Epsilon, a national scientific fraternity for women of which Latham had been a charter member at the University of Chicago, established a fund in Latham’s memory that would provide loans for women studying science.